Most people decide to represent themselves or get a public defender for misdemeanor charges like DUI, reckless driving, aggressive driving, speeding 30 mph over the speed limit, minor marijuana possession, minor in possession, disorderly conduct, suspended license, suspended registration, and no insurance. But an arrest is not a conviction!

If you want to have any chance of getting your case dismissed, you must not plead guilty at your arraignment in Alpharetta Municipal Court. Talk to Larry Kohn, Cory Yager, or Bubba Head before you go into the courtroom. Use our experience and expertise to your advantage.

An Alpharetta Criminal Law Firm With Over 140 Years Combined Experience

Larry, Cory, and Bubba combined have over 140 years of courtroom experience, from arraignments to full felony trials. While the vast majority of our client’s cases never go to trial, which is a good thing, it is wise to choose a criminal attorney in Alpharetta that has gone to trial and won in Fulton County Superior Court.

The first thing you should do is call us immediately at 404-567-5515 and come in for a FREE consultation. Tell us what happened and who was there. Bring in copies of all paperwork the police handed you when you were released from the North Fulton County Alpharetta Jail.

Even if you ultimately decide not to hire our Alpharetta GA lawyer firm to defend you, you will learn a lot more about what to expect at your first court date, which is called an arraignment.

Remember, an arrest is NOT a conviction! Far from it. You are innocent until proven guilty.

Alpharetta criminal attorney Bubba Head has represented 1,000s of clients over a 40-year career. He and his partners know the Alpharetta and Fulton County court system very well. 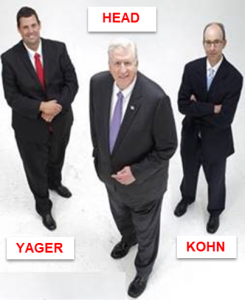 What is an arraignment? The classic legal movie, My Cousin Vinny, eloquently and forcefully defined what happens at an arraignment, whether it is a murder case or a speeding ticket case. When Judge Chamberlain Haller explained to the novice criminal defense attorney Vinny Gambini, played by Joe Pesci, that (after the charges against the two “utes” were explained by the Prosecutor), “You can either plead GUILTY or NOT GUILTY.”

Then, once the person accused is arraigned, and enters his or her plea, the case will either be resolved in Alpharetta Traffic Court immediately, by entering a guilty plea, or your case will be reset to a future date for other proceedings like obtaining discovery, waiting on a blood test, hearing pre-trial motions, or trial.

Do I have to attend my arraignment? Technically, yes. But every Alpharetta criminal lawyer at our Cambridge Square office knows that (for people fighting their case) the first appearance in the Alpharetta Court is a waste of our clients’ time. So, our Alpharetta DUI attorneys postpone the arraignment for you. The personnel at the Alpharetta Municipal Court clerk’s office are exceptionally accommodating, and our Alpharetta attorneys often change the court date to fit our client’s schedule.

Our criminal law firm answers your calls during the day, at night, on weekends, and even on holidays. Why? People in urgent trouble don’t want to talk to a machine and leave a message.

As soon as we speak with you, our highly-trained Georgia criminal attorneys and support staff can help you win the best outcome.

Call us now at 404-567-5515 We are here to show you how to BEAT an Alpharetta criminal charge. We will accept nothing less. The sooner you call us, the better chance we have to win your case.